After a fun time on the party island of Ibiza it was time to start heading for Gibraltar. On our second night we almost got run over by the cruise ship 'Disney Magic'. Kurt called them to tell them that we were under sail (wing and wing) with limited maneuverability and they made the grand gesture of a one degree course change. We joked that they wanted to get close enough to light us up so that the guests could take pictures and sure enough that's what they did. 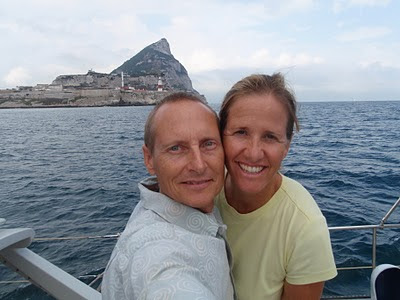 We arrived at Gibraltar in calm weather motoring against up to 2 knots of current and dodging copious ship traffic. The only place to anchor was actually just across the border in Spain at the town of La Linea (27 ft, 36d09.42'N, 5d21.69'W). We found plenty of room in what appeared to be an all weather anchorage behind the breakwater. During a night approach an easy alternative is to anchor in the large bay just outside the breakwater. The new marina here (Puerto Deportivo +34 956 021660, info@puertodeportivoalcaidesa.es ) is up and running with power, water, laundry and internet. The old marina which is closer to town is now a private yacht club but will let you park your dinghy near the office/restaurant for 5 Euros for 24 hr access thru the front doors of the building. There are steps on the north side of the breakwater separating the old marina from the beach where dinghy landing (but not mooring) can be made. La Linea is a working class town serving Gib with some old buildings and shops trying to attract cruise ship tourists across the border. The Mercadona supermarket north of the town center has the best prices we have seen in the Med with large quantities and a good selection. There is a good butcher near the center of town and a Carrefour 2 km north.

On Tuesday we took Interlude to the fuel wharf in Gib and loaded 1100 liters of diesel at 64 pence/liter ($US 3.75/gal). This was at the brand new Cepsa station (BP was 0.62 L/l, Shell 0.69 L/l). We also got fuel and oil for the dinghy. After re-anchoring off La Linea we took the dinghy back to Gib and visited some friends in Ocean Village/Marina Bay (VHF 71, +350 200 73300). We were allowed to visit within the marina compound but not go into town. To properly cross the border from Spain requires walking thru a checkpoint and across the airport runway. 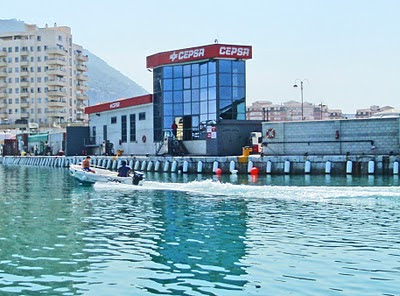 Gib and La Linea marinas were quoted as roughly the same price for our 23m yacht (50 Euros/day) and both had space. However the Gib marina is more convenient to to a nicer if touristy town.

We planned to remain in the La Linea/Gibraltar area for a few more days but on Wednesday the Guardia Civil came by and told every boat in the anchorage to leave. They said it was not possible to anchor off La Linea and we should go into a marina (either Puerto Deportivo or Ocean Village/Marina Bay in Gib). We asked where we could anchor and they said to call Algezeras Trafico (VHF 8, 13, 16, 74) who told us to contact Algezeras Pilot Station (13) who said to contact our agent who will contact the authorities for an anchorage position (like all the other ships).

There is now no authorized yacht anchorage in the entire Gib/Algezeras area and you must berth in a marina. This is now becoming typical of all ports in Spain.

We know when we are not welcome so on Thursday we left for a 70 mile run out the strait and up to Cadiz.
Posted by Kurt and Katie Braun at 7:13 PM