We are now in Marina del Rey where Interlude's sistership Deerfoot II is berthed. On the way in Friday we were greeted by 'Beowulf' another Dashew design and had her crew over for drinks. Yesterday we visited some of the Dashew family aboard Deerfoot II and had drinks at the California Yacht Club. 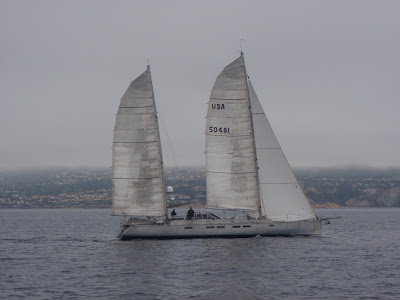 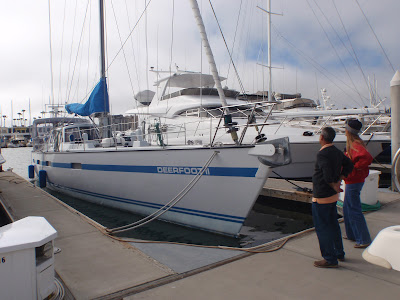 Also on the way in, the mega MV 'Air' was in the marina channel with her helicopter taking off. She probably had to move out of her berth to use the chopper. 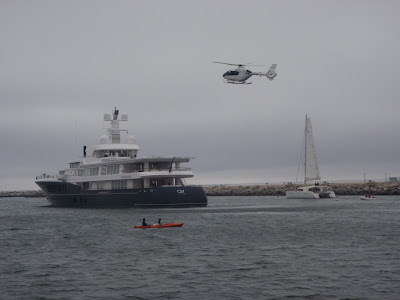 The marina is part of a condo complex with boater dedicated bathrooms, showers, laundry and heated swimming pool. Interlude is in a vacant end tie berth known of by Errol, the helpful captain of DF II (33d58.38'N, 118d27.18'W, Basin 'A' berth 1623/1624 Marina Harbor Anchorage).

Today we plan to have Easter Brunch with Jeff & Gayle who we meet cruising in the Pacific, have their yacht in the Med and a home in Beverly Hills.

We wish you all a happy fertility celebration and us Christians peace of mind.
Posted by Kurt and Katie Braun at 7:19 PM No comments:

We are finally back in the US of A after leaving Newport RI in September of 2012.

After clearing customs at the SD Police Dock (had to give up some made in USA chicken in original packaging) we are now at the Southwestern Yacht Club where the bar and dinner await.

The Southwestern Yacht Club has gotten upscale since we last were there ten years ago (32d42.82'N, 117d14.06'W, 12 ft no charge). A new building with good restaurant, bar, showers, etc. was ours for three nights with very nice and helpful members. We declined borrowing a car and walked a couple miles to Trader Joe's to stock up the fruit, veggies and meats the US CBP would not allow in. We still ended up eating dinners at the yacht club because the food was so good and inexpensive.

The real estate along the beach was very impressive and we had fun walking in front of all the beachfront homes.

Today we motored 60 miles to Newport Beach and chose to anchor in the designated anchorage off Lido Island. Freshly dredged, the anchorage is now open again and we are the only boat in it! The club CFJ junior program is in session and one of those water jet packs is flying around for rent. 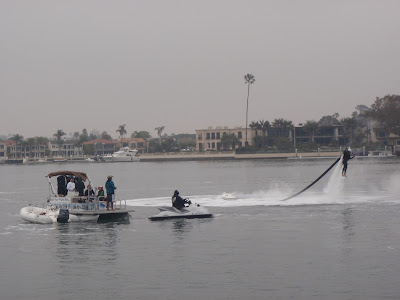 Katie is studying the City of Newport Cruising Guide ( www.newportbeachca.gov/harborguide ) for restaurants with dinghy docks. 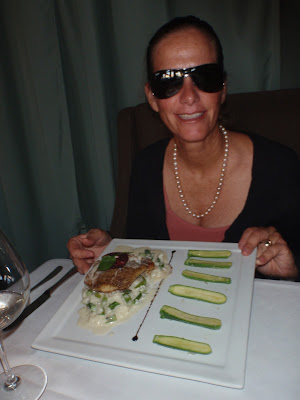 So far Newport Beach is looking pretty nice...
Posted by Kurt and Katie Braun at 1:38 AM No comments:

Ensenada has been a surprisingly fun stop. Our friends Jan and Ramona took us wine tasting in the Guadalupe Valley where we toured the oldest (Santo Tomas) and biggest (L.A. Cetto) wineries and had a great meal at La Hacienda. They also took us to La Buffadora (blowhole on Punta Banda) and shopping in town for art glazed flowerpots(!) for the house. 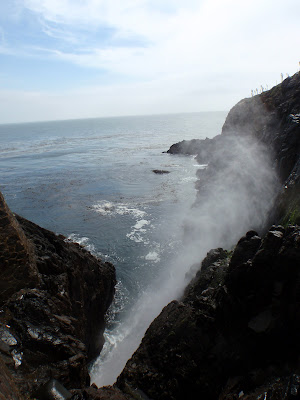 The Coral Hotel and Marina have nice amenities including indoor pool and spa with steam room and gym, clubhouse with pool table and big screen tv and the savings at the fuel dock paid for it all. The local morning net is on VHF 69 at 0800 M-F and 0900 Saturday, donuts at the Marina Coral clubhouse at 0930 on Saturday and don't miss the Sunday brunch at the Hotel. 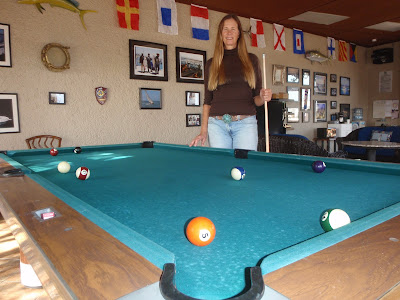 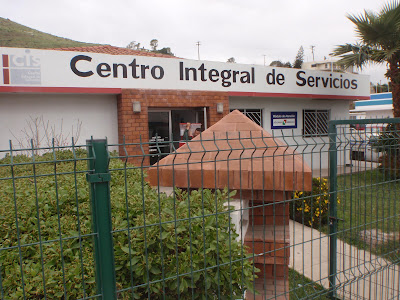 Although outward clearance for US boats and US citizens may not be required to enter the US by CBP (depending on the US customs officer), we had the marina van take us to the one-stop office near the port where the marina agent took care of all paperwork for $25 plus a $30 fee for Interlude. He also took us back to the pottery shop for more pots(!) with one urn so big we had to stow it in the main salon because it wouldn't fit into a cabin. 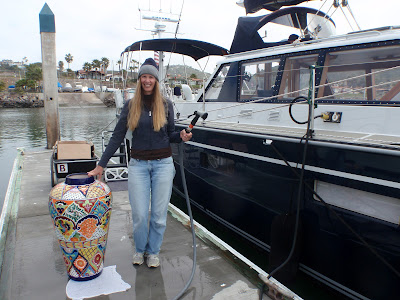 Tomorrow (Sunday) we plan to sail 60 nm to San Diego, check in with CBP and then spend a couple day at the Southwestern Yacht Club guest dock.
Posted by Kurt and Katie Braun at 2:32 AM No comments: 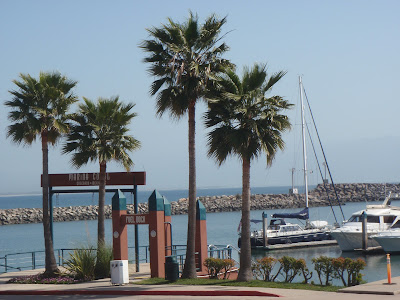 We are now moored at the end of B Dock in Marina Coral, Ensenada (31d51.80N, 116d39.66W, 12 ft). They were serving a big Sunday buffet brunch at the Hotel Coral so instead of fueling the boat we fueled ourselves! The marina was kind enough to give us a 10% discount card for the hotel restaurant, spa etc. normally only given to long term tenants. The Marina/Hotel complex is very nice ( www.hotelcoral.com ) and the weather is forecast to be cold and rainy in Southern California so we signed up for a week. 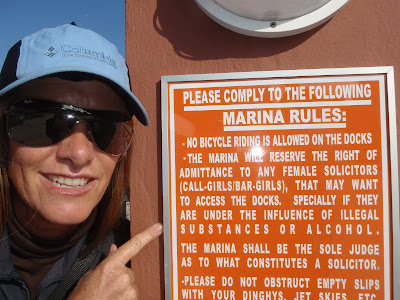 Our friends Jan and Ramona who we meet in the South Pacific are now based here aboard their 30 footer 'Jatimo'. They greeted us, gave us a tour and we joined them for the buffet. This area also grows grapes and is said to be what Napa Valley was like so some wine touring may take take place over the next couple days.

On the way into the bay at dawn this morning we passed a yacht we haven't seen since Indonesia ('Dutch Touch' Sundeer 60). They have also circumnavigated and are also just coming up from Panama. Unfortunately the captain was injured off Cabo San Lucas and had to fly home leaving a delivery crew to sail to their home port near Los Angeles. They had no autopilot, ran completely out of fuel and were sailing into the bay where they planned to anchor and jug some fuel out to the boat.

We plan to top off fuel here tomorrow at high tide (there is apparently a shoal at the fuel dock) and the savings for fueling here vs. San Diego will pay our berthage for a few days.
Posted by Kurt and Katie Braun at 2:57 AM No comments:

We did not stop at Turtle Bay yesterday afternoon and made it to the Northern tip of Cedros Island at sunset in calm conditions. Then coming out of its lee we hit 20 kn of cape effect wind and chop for about an hour before the headwind settled down to 8-12 kn for the night. Throttling back to a boatspeed of 7 kn for a smoother ride gives us a Sunday morning ETA at Ensenada. Fuel is said to be much cheaper there ($3.80 vs. $4.80) and we will be low again after all this motoring.

We plan to get a slip in Marina Coral ( www.hotelcoral.com ) for the night after fueling, check out of Mexico and then make our way 60 miles to San Diego for inward customs clearance and then a guest berth at the Southwestern Yacht Club (+1-619-222-0438).

The US Navy is advertising a live fire exercise west of the Channel Islands on VHF 16 and just reprimanded the USCG for hogging channel 16 while working a vessel in distress. Your tax dollars at work - sort of.
Posted by Kurt and Katie Braun at 6:53 PM No comments:

We had the mainsail up yesterday to boost our motoring speed by about a knot. The wind picked up briefly to 10 kn but the trip remains a mostly calm motorboat ride.

We made use of the electric heat last night and are wearing watch caps and fleece. There was more fog in the early morning hours and the sea water temp is now 58F (starting to see floating kelp). With fog and hardly any moon it is strictly instrument flying.

We passed only three yachts and one ship - all heading south except for the Grand Princess. Quite a few whales on the humpback highway though.

Turtle Bay is six hours away and we may stop for a day or so if it will be calmer later.
Posted by Kurt and Katie Braun at 6:24 PM No comments:

Our nice sailing conditions across the Gulf of California continued almost all the way to Cabo San Lucas where we ran out of wind. That is a good thing going around this cape which can have quite boisterous chop and headwinds. Rounding just before sunset we had calm wind and flat seas which have now continued until morning. The Grand Princess was leaving the anchorage and is also heading for San Francisco - ETA 3 days (at 20kn+). 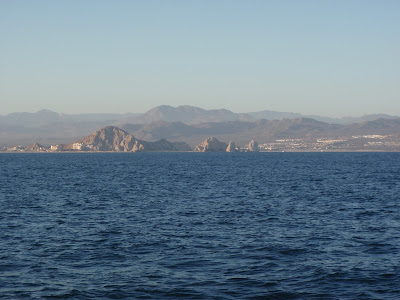 We are now off Bahia Magdelena in fog(!) with a chilly (for us) sea temp of 61F.

So far no Baja Bashing.
Posted by Kurt and Katie Braun at 6:02 PM No comments:

We just shut off the engine after 24 hrs of motoring across the sea formerly known as Cortez. Cabo is still about 65 miles away where we begin the Baja Bash proper. For now we are sailing nicely under full main and code zero genoa in light northlerlies making wind speed on a close reach (7 kn in 7 kn).

Our freezer should be empty when we reach San Diego or Customs will confiscate all meat, eggs, fruit and veggies. Fish is OK and maybe some cheese bought on the US East Coast.

After a month in Banderas Bay, Mexico most of it spent in Marina Riviera Nayarit in La Cruz de Huanacaxtle with our Canadian friends Rod and Dar aboard, we are now underway to San Diego and have just left the anchorage at Punta de Mita (20d45.74'N, 105d31.19'W 30 ft) and have already spotted another whale. 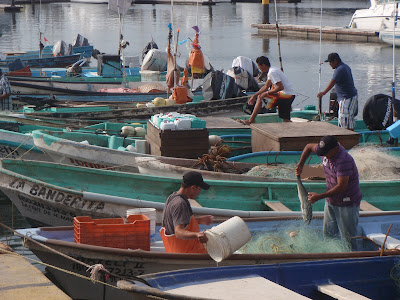 La Cruz was a fun place to hang out (some people never leave) and our activites included:

Zip lining with Canopy River who have the longest line in Mexico (over 2100 ft and up 300 ft). Katie overcame her fear of heights on the 12 cables and mule riding knowing there was tequila tasting back at the end of the tour. 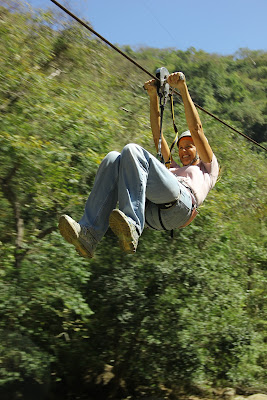 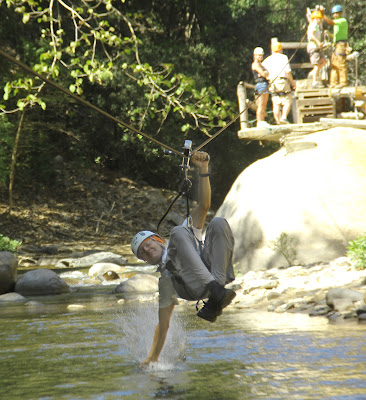 Kurt racing in the Mexico Masters Laser championship with a boat chartered thru PV Sailing. 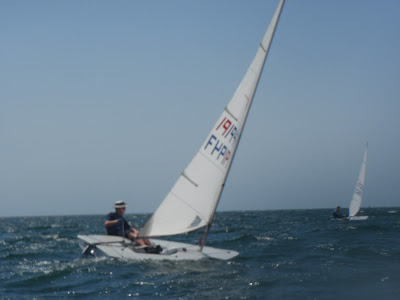 A trip to the old mining town of San Sebastian with April ( ajsurfs66@hotmail.com ) 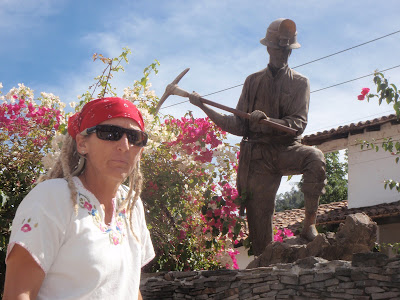 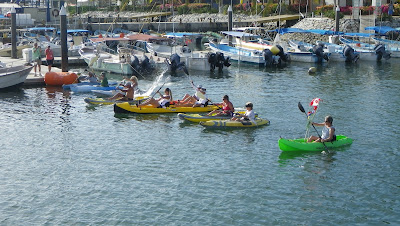 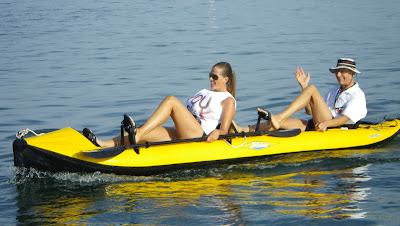 Going out almost every day and night to eat and listen to live music: 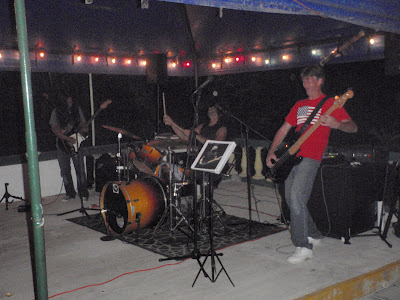 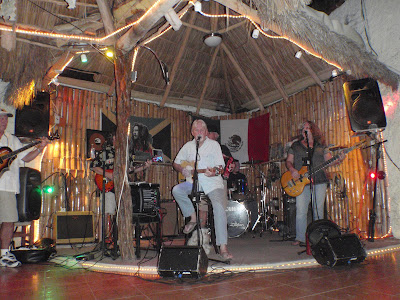 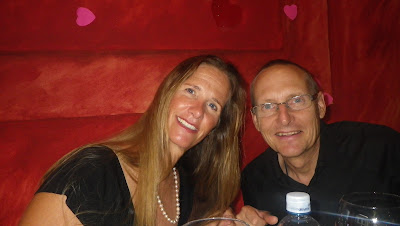 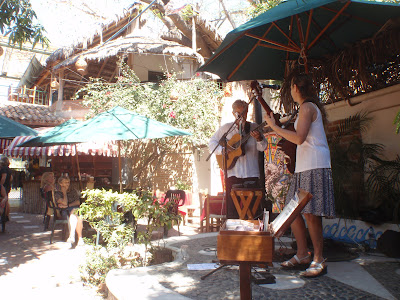 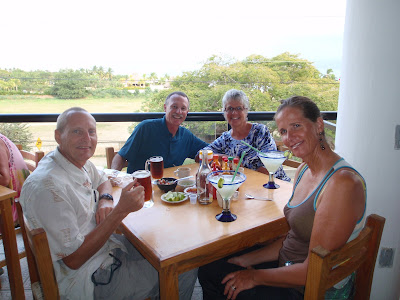 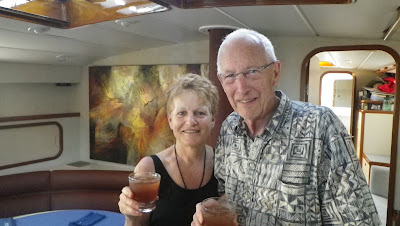 We will see how long our weather window lasts. This has the potential to be a rough trip but we can pull over in a few bays along the way.
Posted by Kurt and Katie Braun at 7:42 PM No comments: