We had a very nice time anchored in Petit Anse, Terre d'en Haut, Iles Des Saintes, Guadeloupe (50 ft, 15d52.13'N, 61d35.17'W). Some of our friends (on Cristata, Monearn, Gipsy 4 & Mindemoya) who also crossed the Atlantic this season were there and we picked up right where we left off in the Canary Islands with afternoon Bocci Ball games (in the park near the helicopter landing pad) and sundowners ashore. There was a great pizzeria (Gourmande) with reasonable prices where we became regulars. On the weekend some locals in costume paraded down the one street in some sort of Carnival celebration. Hikes up to Fort Napoleon (easy) and Le Chameau Lookout Tower (hard) were worthwhile. Clearance in and out was possible at the government office near the church. There were a couple 'supermarkets', an open air produce market and a bakery. Ferries run regularly to Basse Terre from the jetty in town carrying crowds of tourists.
The last time we were here was on a charter yacht about 20 years ago and we seem to recall less infrastructure and more coral/fish. Although really not that good, the best snorkeling we found now is on the west side of Pain de Sucre (Sugarloaf) near the beach or on the reef in the middle of the bay near the red buoy.
Hoping to find some better underwater sights and after nearly a week in 'The Saints' we moved north to the Cousteau National Park at Pigeon Island off the West coast of Basse Terre, Guadeloupe. Although we saw some yachts take a mooring out on the islands we chose to anchor just outside the park boundaries in the big bay off a nice beach (30 ft, 16d10.32'N, 61d46.82'W). We took the dinghy to one of the moorings, circumsnorkulated Pigeon Island and found the coral quite damaged but with a fair amount of various fish. It was certainly not worthy of being named a national park after Cousteau or scuba diving despite the numerous dive operators. A nice black sand beach back in the village lent itself to some great 'beach bocci' with our friends and the draft beer at the beach bars was not bad. We took a walk along the road south to discover two big supermarkets. Returning to them via dinghy and the small boat basin nearby (pushed the shopping cart right to the wharf) we stocked up on provisions for the next couple weeks.
After two days at the Pigeon Island Anchorage we moved back up to Deshaies. We and our cruiser friends played bocci on the lawn in the park just up the river from the dinghy landing every afternoon. Rain showers yesterday however forced us to play on the beach near the covered clubhouse veranda where we eventually took to rolling the balls on the patio.
We plan to set sail tomorrow for Tortola, British Virgin Islands some 200 miles NW.
Posted by Kurt and Katie Braun at 9:03 PM No comments:

Posted by Kurt and Katie Braun at 6:33 PM


Anse Deshaies (pronounced Day-Hays) on the NW corner of Guadeloupe is a good sized bay accommodating dozens of yachts with a river, small boat harbor, and town. Checkin was self serve on a computer at the Pelican Internet Boutique. Three Euros paid to the shop and they print and stamp your clearance paper. No need to show outward clearance from your last port. Guadeloupe is one of the twenty-six regions of France and an integral part of the Republic and the EU.
We hiked up the road heading south out of town to the Jardin Boutanique (Botanical Gardins E14.50 pp). They were worthwhile seeing with huge Koi pond, Lorikeet and Macaw aviaries, waterfalls, streams, paved path and labeled plants from around the world. (allow three hours for hiking up, viewing and back to town). Lunch at Resaurant La Kaz across from the Pelican Internet was excellent.
Posted by Kurt and Katie Braun at 6:19 PM


We finished off our month in Antigua with another Sunday jumpup at Shirley Heights, this time accompanied by over a dozen other cruisers that we have become friends with on our travels. The hike up from Galleon Beach in Freeman Bay where we were anchored and the view from the historic lookout converted to party central were as spectacular as ever. The BBQ, drinks and music all contributed to a fun time had by all (a crowd of at least 200).
Checkout of Antigua Monday morning was easy but we did have a $US 55.00 departure tax. The five hour beam reach sail to Anse Deshaies on the SW corner of Guadeloupe was uneventful except for one squall that we skirted that tried to start a waterspout (more of a 'mist devil'). We anchored in 30 ft at 16d18.48'N, 61d47.91'W.
Posted by Kurt and Katie Braun at 6:45 PM No comments:

Posted by Kurt and Katie Braun at 6:39 PM No comments: 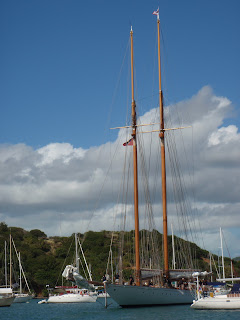 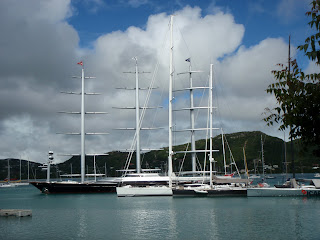 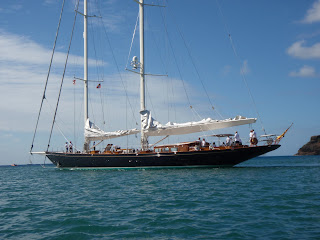 After watching some of the megayachts (Maltese Falcon, Elena of London, Rebecca, etc.) race the buoys here on New Years Eve, we went ashore for dinner at Nelson's Dockyard. The yachts lining the quay and at anchor had their decks and rigs all lit up in full opulance mode. Live music and a crowd of about 300 kept us going until midnight when the hilariously paced fireworks started. These guys must have been stoned, ran out of matches or both. The anemic start was about five minutes late and then a burst would go off every few minutes with a huge finale about a half hour later. The hillside at Freeman Bay where we are anchored was ablaze with a brush fire heading for Shirley Heights and the fire brigade took about an hour to get there.
Everything seems OK this morning - another year, another day in paradise. Feeling a bit 'Antigua' (Spanish for ancient) today though... 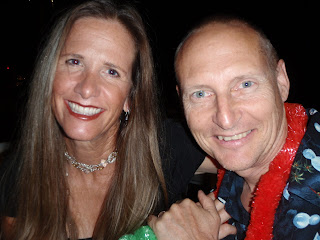 We wish you all a happy, healthy new year.
Posted by Kurt and Katie Braun at 2:26 PM No comments: