At 1100 hrs today we left Newport heading for Bermuda 620 nm to the southeast. We should be there in 3-4 days if we decide to stop. Otherwise we could head for the British Virgin Islands to meet Kurt's brother who is bareboat chartering there October 6-16. Or we could continue to Panama to be out of hurricane danger for the rest of the season. We will be atching the weather closely.

Posted by Kurt and Katie Braun at 5:28 PM No comments:

Our stay in Jamestown/Newport has been very pleasant with Interlude on her old mooring in Jamestown and now anchored in Brenton Cove, Newport Harbor (41d28.74'N, 71d19.74'W). Touring the mansions was the highlight and a trip to Mystic Seaport by rental car with some friends was a fun time.

We visited five of Newport's famous Gilded Age mansions. Now owned and operated as museums by The Preservation Society of Newport County these 'summer cottages' of rich industrialists (Vanderbuilt (railroad), Berwind (coal), Oelrichs (silver) etc.) are some of the most elaborate and expensive homes ever built in the US. The advent of income tax, inheritance tax, property tax, etc. rendered them unsustainable and slated for demolition. Recognizing this fate the non-profit Preservation Society was formed and many were saved (no taxes) with much of the auctioned furniture donated back to the original houses. A package deal allowed us to chose five of eight mansions for $31.50 pp. A better deal would be a yearly couples membership to the Society for $75 allowing unlimited access and further discounts on special events ( www.newportmansions.org ). We also enjoyed the Cliff Walk trail winding along the coast behind the mansion properties and leading to the new mansion district along Ocean Drive. Not as elaborate as those of the Guilded Age (a derogatory term coined by Mark Twain for the late 19th century and its conspicuous consumption) these are still quite spectacular. Continuing on across Newport Neck and past the County Club we ended our trek at Fort Adams State Park and the Museum of Yachting with its exhibit on the yacht Coronet (1880, being restored in a boatyard downtown).

Mystic Seaport is to preserving colonial maritime history what Williamsburg is to showcasing an early settlement. Many of Mystic's historical trade shops (sailmaker, mast hoop, rope, cooper, etc.) are open to the public and converted to museums. Several antique vessels are docked and open for touring and the last surviving wooden whaling ship is being restored at the cost of five million. We were a bit disappointed that the docents were not in costume like in Williamsburg and the price of admission was quite steep ($24 pp).
After taking on 226 gallons of diesel in Jamestown ($4.60/gal), we got outward customs clearance, prepared several meals and now plan to head for Panama with a stop in Bermuda if weather permits. Hurricane Nadine, mid-Atlantic near the Azores, is forecast to downgrade in a couple days but we will be keeping an eye out for further tropical developments.
Posted by Kurt and Katie Braun at 5:23 PM No comments: 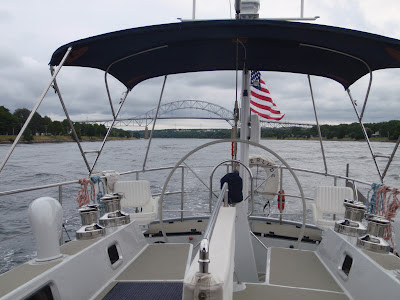 From Boston we had a nice sail back to Provincetown on the tip of Cape Cod (42d02.27'N, 70d11.02'W, 55 ft) and from there staged a transit of the Cape Cod Canal the next morning saving us a day of travel in good weather and having to wait out bad conditions going around the Cape. Dreamt of by colonists, surveyed by George Washington, originally dug in 1914 and finally expanded and completed in 1940 the canal now allows commercial shipping and pleasure craft a safer, shorter trip from New York to Boston. With a tidal difference of around five feet between Cape Cod Bay and Buzzards Bay we consulted Eldrige's tide book again to ensure a favorable current (4 knots!) for our transit that day.
Once in Buzzards Bay we hoisted sail (no sailing allowed in the canal) and made our way to Newport RI where the Annual Newport Boat Show was in full swing. There we meet some old friends, made some new ones, scored some free tickets and enjoyed the Newport yachting scene. This included the Brockerage Show (free) featuring some enormous megayachts and walking the exhibitors tents on Sunday. Anchorage in Newport can easily be found between the Goat Island Bridge and the big bridge spanning Newport to Conanicut Islands: 41d29.81’N, 71d19.69’W,32 ft. Brenton Cove, just off the Ida Lewis Yacht Club is also an option (north of the extensive mooring field but south of the underwater cable). 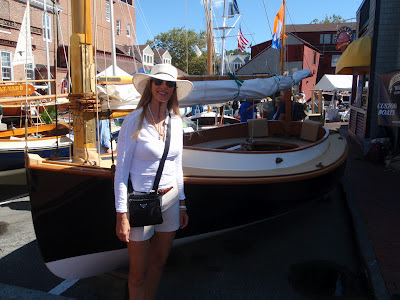 Today we moved Interlude across the channel to where she was moored by her second owners off their home in Jamestown RI. Offered the use of a private dock, mooring (41d29.37'N, 71d21.69'W 15-25 ft), laundry, bicycles, wifi, etc. we couldn't refuse and will be here a week or so doing chores and touring Newport's famous mansions. 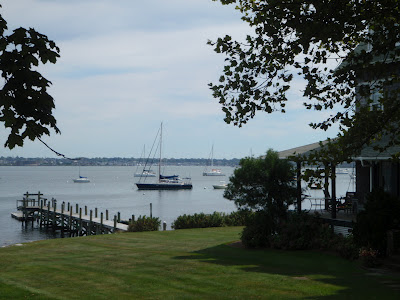 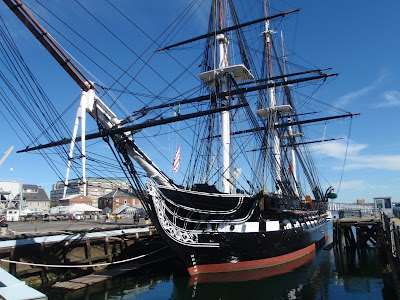 Boston, with its high rises visible a mere 20 miles away beckoned and we found an anchorage in the harbor near the airport Hyatt. A dinghy ride across the channel and we were downtown with all the history, food and drink this old town has to offer within walking or subway distance. Some friends we meet while circumnavigating have now settled in Boston and kindly showed us around. We walked the 'Freedom Trail' featuring many historical sites from the Revolutionary War including the site of the Boston Massacre, Paul Revere House and Old North Church (one if by land, etc.), Bunker Hill and 'Old Ironsides' the USS Constitution one of the first ships in the US Navy:  Visiting these historic sites gave us a renewed appreciation of the bravery, sacrifice and vision of the colonists and founders of this country. 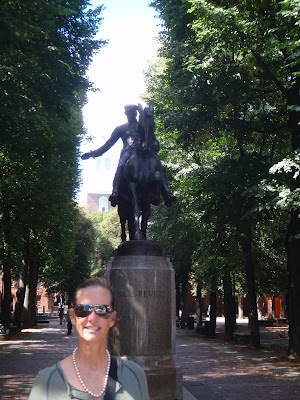 Harvard University was a short subway ride away in Cambridge where we took a student lead tour of the oldest University campus in the US (Harvard Yard) and the environs of Harvard Square. She suggested a visit to the Harvard Museum of Natural History which has a world famous collection of over 3,000 botanically correct glass plant models (known as the Glass Flowers). A kiss under Johnston Gate is said to make sweethearts forever. 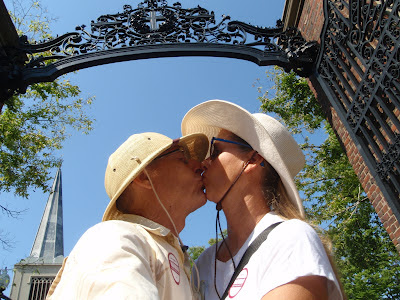 The Italian restaurants and Irish pubs in North End kept us well nourished and lubricated. Favorites include Lo Conte's Authentic Italian Cuisine, Regina's Pizza, The Sail Loft for casual drinks, and The Green Dragon Tavern for history buffs (the 'headquarters of the Revolution' where the Boston Tea Party was planned and Paul Revere got word of the British plans and  set off from on his famous ride). 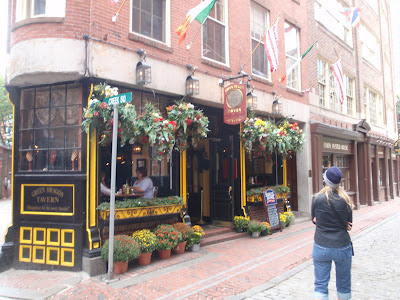 We took a nice long walk thru the Boston Common, Public Garden, down Commonwealth Avenue Mall (stunning homes either side), past Fenway Park to the I.S. Gardner Museum. This palace completed in 1903 and built to house an eclectic collection of art and antiquities now sports a controversial Renzo Piano addition forming a new public entrance with performing arts center, shop and other amenities. Isabella Gardner stipulated that nothing was to be moved or altered and her bizarre juxtapositions remind us of Hearst Castle but with hoarding tendencies. 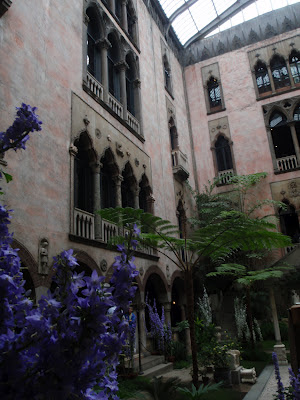 Posted by Kurt and Katie Braun at 6:41 PM No comments: 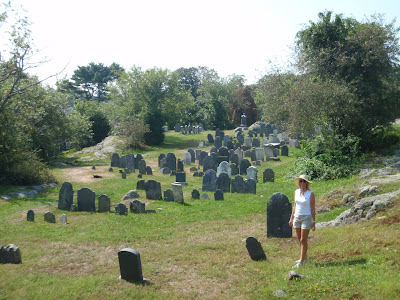 Marblehead also has the Jeremiah Lee Mansion, one of the most important Georgian colonial homes in the US. Built in 1768 it has 18 furnished rooms on three floors. 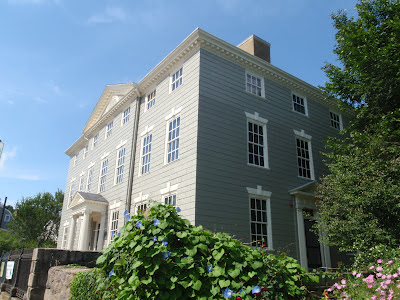 Another attraction the Captain remembers reading about as a boy is Redds Pond next to the graveyard. This is where organized model yacht racing began in the US in the late 1800's and Kurt was able to catch an EC12 race and sail one of these radio controlled 12 meter scale models. 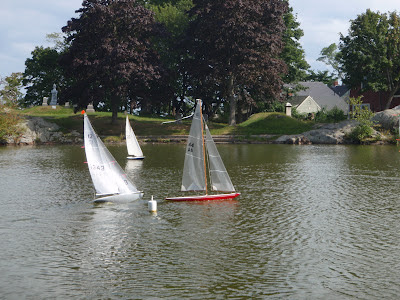 Posted by Kurt and Katie Braun at 6:25 PM No comments:

Salem is obsessed with witches and witchcraft with plenty of tourist shops and attractions taking advantage of the towns sordid past. We fell under its spell and visited the Salem Witch Museum featuring an audio-visual manikin show explaining the trials and hysteria of that time and then relating it to modern times by applying the Fear - Trigger - Reaction principle:
Witchcraft - Hysterical Girls - Innocent people imprisoned/tortured/killed
Japanese - Pearl Harbor - Internment Camps
Communism - Mc Carthy - Blacklisting
Terrorism - 9/11 - Patriot Act
We also visited the Peabody Essex Museum, an impressive facility showcasing art and culture gathered during Salem's globe circling maritime trading past. The National Park Service Salem Maritime National Historic Site shows some short films on the subject in their visitor center near Derby Wharf where the Friendship tall ship is docked.
Posted by Kurt and Katie Braun at 6:08 PM No comments: