The National Park on Otok Mljet was very nice with a bus and boat ride included in the 90 Kuna ($18) pp entrance fee. Thinking the overcast weather would make for cooler exploring ashore, we tied the dinghy up to the wharf near the old Roman ruins and where the Park ranger boat is moored. A short walk to the Park kiosk to buy the entrance tickets and within a few minutes we were on a bus to the '' which is actually an inlet from the sea. A short bus ride later we boarded a launch in the rain to take us to a 12th century Benedictine monastery built on a small island in the ''. In our group were a small wedding party touring by charter yacht after their ceremony in , a location chosen partly because it was mid-way between the groom and Russian bride's families. The buses and boats ran about every hour so we took our time exploring the island and the lakeshore. It was very scenic with pine trees overhanging the water, just a few old mansions, vineyards and the occasional tourist on a rental bike. The park officials came by Interlude every day in their boat to check if we had purchased our entrance tickets. We could stay as long as we liked (there was no anchoring fee) but the weather was clearing and it was time to catch the Thursday night performance of the Moreska in Korcula. 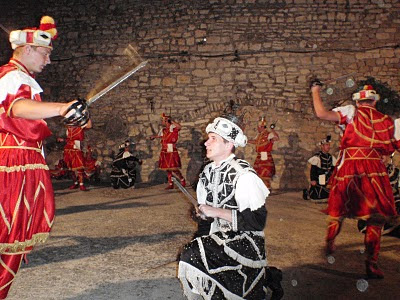 The Stari Grad (Old Town) Korkula on Otok Korkula was about a mile dinghy ride from our new anchorage in the Canal Zezenica off a 14th century Franciscan monastery on the small island of Badija (40 ft, 42d56.95'N, 17d09.71'E). We went into Korcula at 1700 to have time to sightsee the medieval towers, walls, alleys, cathedral, chapels, etc. and have time for a nice seafood dinner at the restaurant just as you enter the main gate before the show started at 2100. The Moreska is a folk dance that was popular throughout the Med but is now only preserved in Korkula. The dancers are one woman and two groups of young men wielding swords to commemorate a fight between Christians and Moors over a young girl. We sat in the front row of an open air theater trying not to get trampled or hit with sparks flying from the clashing swords. Live music was provided by a community brass band who sounded much better playing the traditional dance tune than the pop music intro. The dinghy ride back in the dark was easy in the sheltered waters of the channel but we did have to avoid a ferry departing for or .
Today we sailed to the Pakleni islands off Otok Hvar. After some snooping around we settled in a cove on Otok Marinkovac called Uvala Stipanska (40 ft, 43d09.57'N, 16d25.36'E). These small islands with their many secluded coves are frequented by naturists and we have already spotted some wandering along the shore.
Tomorrow we plan to dinghy to historic , one of the most popular destinations along the .