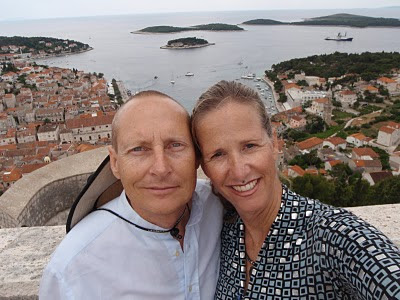 We weren't attracted to the night life and glitz of new medieval Hvar Town so instead of mooring in the harbor we took the dinghy from our quiet anchorage in the Pakleni Islands. Anchoring off the town does not provide much shelter, the quay is very busy and the discos would have been unbearable (we could just make out the noise about a mile away in our anchorage). A hike up to the Venetian fortress above town for a panoramic view, a visit to the Franciscan monastery & museum, lunch at one of the many bistro/pizzerias, window shopping (even North Sails had a clothing boutique) and we were done. Dinghying back to Interlude thru the islands we spotted some more naturists sunning on the rocky shores. As we were weighing anchor three large motor yacht were coming in to what had been our secluded cove. 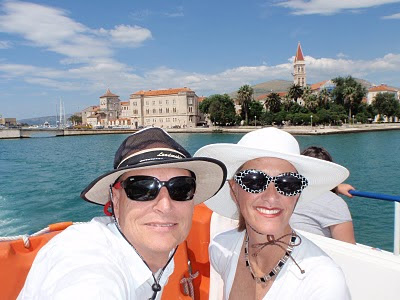 Sunday we sailed to the World Heritage site of Trogir on the mainland and anchored off the west side just out of the busy channel (25 ft, 43d30.84'N, 16d14.42'E). The old town of Trogir with its 15th century walls is built on a small island (as you did back in the day). Leaving the dinghy in the small canal on the north side we entered thru the 'Land Gate' and found ourselves in a vehicle free labyrinth of alleyways with a mixture of Romanesque and Renaissance architecture housing tourist shops, apartments and restaurants. Walking thru to the other side we came across the Cathedral of St. Lawrence and climbed the 15th century Venetian bell tower for a great view. The 13th century carvings of Adam & Eve with lions around the front door are also worth seeing. A visit to a travel/tour agency revealed that we could take a one hour ferry ride to Split($US 4 pp one way). The bus trip is also about an hour but the ferry takes you right where you want to go. We caught the ferry at the little wharf just across the south bridge and to the east. 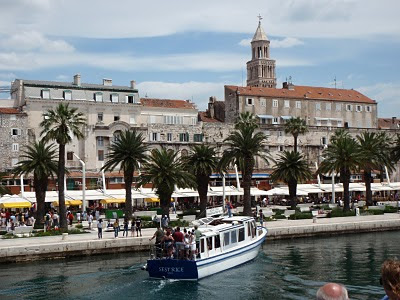 Once at Split we could see that taking the ferry there was much easier than taking Interlude. There are a couple of marinas but all the big yachts are on the outside exposed to the numerous ferry wakes and surge. The town quay is even worse but there were a couple of yachts anchored between the marina and the quay avoiding the turning basin for the cruise ships and large ferries. After a hearty lunch at hotel Tifany's restaurant we took a private walking tour (KN 90 pp) of what now remains of Diocletan's Palace. The Palace complex, built around AD 300 as this Roman emperor's retirement villa, now encompasses a good portion of old town Split. Our guide pointed out the many architectural styles that were built through the ages existing side by side and intersecting. Roman temples converted to churches; palace kitchens, servants quarters and basements now tourist shops, apartments, museums and banks. It was fascinating trying to find the old Roman Palace works amongst the later constructs. There was also continuity however, with one Italian family living in the same building since the 15th century.

Overdosed on medieval metropoli we will find a new anchorage this afternoon and just relax.
Posted by Kurt and Katie Braun at 3:35 PM