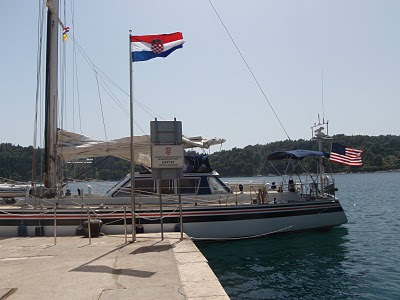 Montenegro (ex Serbia-Montenegro, ex Yugoslavia) and the Gulf of Kotor was a special place with natural beauty and historic sights. An easy check out (other than having to tie to the wharf) and we were on our way 20 miles up the coast to Cavtat, Croatia.
Cavtat, five miles south of Dubrovnik, was an easy (other than having to tie to the wharf) check in: Police, Harbor Master, Police. A new 'tourist tax' just 10 days old and based on vessel length made our total fees for Croatia about $US 680 for three months, people, one year yacht. Returning yachts get a discount and there is slightly lower 30 day fee for crew and passengers. We plan to cruise Croatia for six weeks.
With the afternoon breeze pinning Interlude to the quarantine wharf (42d34.98'N, 18d12.94'E) we rigged a bow spring line and fender on the stem to use the prop to push her stern off. Even the charter yachts with bow thrusters were having a hard time leaving. One skipper who helped us tie up was with a flotilla of ten boats heading for Kotor. They were all Czechs and Katie gave them a big bag of ice cubes for their gin and tonics. Katie, half Czech, found out that her family name means 'twilight' or the red glow at sunrise or sunset.
Port captain Antonio informed us of a 35 Euro anchoring fee for Cavtat so we moved to the other side of the isthmus to Uvala Tiha (21 ft, 42d35.10'N, 18d13.21'E) where anchoring was free. Several other yachts had the same plan that day but Antonio warned us to leave immediately if a north wind picks up. Dozens of yachts are blown ashore in this bay each year. The winds all have names with the Bora or NE wind being the most feared here in Croatia. You also have the Maestral (NW) and the Sirocco or Jugo (S-SE). The car company execs must be sailors. 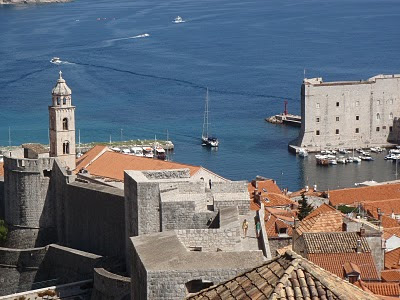 Two wharfs and two country clearances in one day and planned big day of touring Dubrovnik the next day had us in bed early. With calm weather forecasted for the day, we decided to anchor Interlude off the island of Lokrum (42d37.86'N, 18do7.25E) and take the dinghy about a half mile right into Dubrovnik's old harbor. Entering thru the medieval fortifications was grand as we imagined the harbor entrance chain being lowered for us. This ancient city with its many monuments, museums, monasteries, churches and palaces is fully recovered from the 1991 shelling by the Yugoslav army. Significant international aid has rapidly put this famous tourist destination back on the map and even without any cruise ships on Thursday, we still had healthy crowds from the numerous resorts in the area and even a wedding. Entering the city walls at the north gate near where we left our dinghy we took about six hours to see all the main sights: Dominican Monastery, Sponza Palace, Onofrio Fountain, Rectors Palace, Cathedral & Treasury (with a supposed fragment of the Holy Cross and dozens of relics such as the arm of Doubting Thomas), Maritime Museum and City Wall Walk (about an hour to circumambulate with great views). Lunch at Mea Culpa Pizzaria was very nice in a shady cool narrow alley near the Onofrio Fountain. 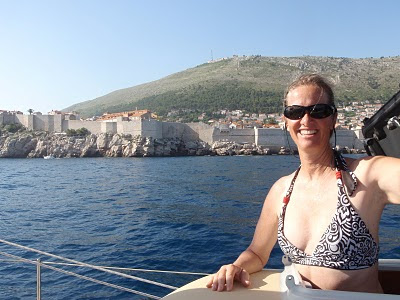 Finishing up with the wall walk got us pretty hot so a dip in Med was called for before moving the boat to the more secure anchorage of Luka Zaton . As we approached the head of the bay a local fisherman advised us that at 2000 hrs there would be nets set in that part of the bay so we obliged and came back down to the cove named Soline (65 ft, 42d41.76'N, 18d02.51'E).
Posted by Kurt and Katie Braun at 9:23 AM